With vaping becoming part of everyday life, it’s about time that we had a good discussion about vaping to find out what it is, what it does and, if it is safe. We have seen so much more coverage on vaping in the past 12 months than we have in 10 years and as a result of the increased interest, a lot of misinformation has been spread.

To fully understand vaping, we must ask three questions: What is vaping? What is it used for? And, what are people vaping? For it is within these questions we can see how so much misinformation has come about in relation to vaping and, we see how easily terminology can be misconstrued and used against this unique smoking cessation tool.

So let’s have a look at the terminology associated with vaping as it is here we will get the answers to our questions.

How are Vapes Used ?

Is Vaping Bad For Your Lungs ?

Is Vaping Better Than Smoking ?

The Dangers of Tobacco Smoking

Is Vaping Safer Than Smoking ?

Debunking the Misconceptions of Vaping

The first thing we need to understand is the word ‘vaping’ and what this term actually means.

The word vaping is a verb. The definition of a verb, as stated in the dictionary is; “a word used to describe an action, state or occurrence”

The key part here is, vaping is an action!

There is a lot of confusion as to what vaping is. You might be wondering what exactly is the action of vaping? Or what does it mean to ‘vape’?

‘Vaping’ is vaporising a substance for the purpose of inhalation.

How are Vapes Used?

To understand how vapes are used, we’d first need to ask why people are vaping in the first place.

As we just discovered, you could vaporize a lot of things but there are 2 main ingredients being vaped across the world.

The first, is vape liquid. Also known as vape juice, e-liquid or e-juice. A mixture of propylene glycol, vegetable glycerine, flavourings and in most cases, nicotine. This as you may guess, is used in place of traditional cigarettes for the purpose of quitting.

The second, is cannabis and cannabis products. These include hashish, shatter, THC oil or CBD oil (THC oil being the culprit in the 2019 health issues which we will cover in detail shortly). Cannabis is vaped for the purpose of getting ‘high’, and for some, it is medicinal. Cannabis for recreational or medicinal use is only legal in some places, in most countries, it is illegal.

There are two answers to this question as there are 2 common vaping products; vape liquids and cannabis and cannabis products. One cannot get one confused with the other, as your health depends on it.

So there is still a small risk, you are still inhaling something, but it is far better than smoking traditional cigarettes. The purpose of vaping vape liquids is for people to stop smoking.

Vaping the Cannabis plant has been proven to be less harmful than smoking it. A study on vaporized cannabis and respiratory risks completed by the Canadian Journal of respiratory treatment, stated; The findings suggest that vapourisation reduces the delivery of toxic by-products associated with the use of smoked cannabis.

Vaping the cannabis plant has also proven to be effective for some treatments including certain cancers.

Cannabis products such as THC liquids however, have been shown to be potentially dangerous due to added ingredients.

Is Vaping Bad For Your Lungs?

In 2019, 2807 people were hospitalised and over 30 people died from what was coined: EVALI

The cause of these deaths has been strongly linked to Vitamin E acetate which is a compound not traditionally used in cannabis vaping products. Vitamin E acetate was used they believe, to stretch out the supply. This was causing the oil to evaporate and become a solidified oil again inside the lungs. This condition was called Lipoid Pneumonia.

There have been no instances of vape liquid that is used for quitting smoking, containing vitamin E acetate.

Is Vaping Better Than Smoking?

The real focus of this article is to discuss vape liquids. The real question then is; is vaping vape liquids better for your lungs than smoking tobacco?

Although the answer seems obvious, it’s important to discuss it.

Firstly, the primary reason smoking tobacco is bad for lung health is due to the smoke. Cigarette smoke contains over 7000 chemicals. Out of 7000, 70 are carcinogenic.

Smoking causes the thin walls of the air sacs in the lungs to thin and become less efficient due to the toxins in tobacco smoke. Over time, this can cause irreversible damage to the lungs.

The Dangers of Tobacco Smoking

Tobacco smoke also contains tar and carbon monoxide. Tar can coat the small hairs (cilia) in the lungs that are designed to filter and expel foreign particles. This allows toxic chemicals from tobacco smoke to go past the cilia and enter the air sacs directly.

The CDC states that smoking can not only damage the lungs but can cause cancer of the bladder, blood, cervix, colon, oesophagus and more.

Vapour from vape liquids on the other hand is closer to that of steam than smoke. They are very different clouds being inhaled and exhaled. There is no tar or carbon monoxide in vapour, and if you are vaping high quality tested liquids, then you can be puffing on ZERO carcinogens.

Is Vaping Safer Than Smoking?

As you can see in the above discussion, most of the harm from smoking comes from the inhalation of tobacco smoke. Removing smoke from the equation makes a massive difference when comparing the safety of vaping to smoking tobacco.

Public Health England state that vaping is 95% safer than smoking and the U.K Royal College Of Physicians have stated: “the hazard to health arising from long-term vapour inhalation from the e-cigarettes available today is unlikely to exceed 5% of the harm from smoking tobacco.”

They are very big statements and based on over 10 years of studies into vaping, the effects and the effectiveness on quitting.

We have established that based on the leading and current evidence, vaping on vape liquids through an e-cigarette is safer than smoking tobacco. But does it work? Or more importantly, Is it an effective way to stop smoking?

Studies conducted in the New England Journal of Medicine titles “A randomized Trial of E-Cigarettes versus Nicotine-Replacement Therapy” found that after randomly assigning adult smokers with either nicotine replacement therapies of their choice, or ane-cigarette starter kit with 18mg vape liquid, the smokers using vaping as a cessation method were more successful.

After years of false statements by the media and different countries, health departments claiming that there was no evidence vaping helped people to quit smoking, this and other studies have proven that vaping is potentially the most effective method to quit smoking. 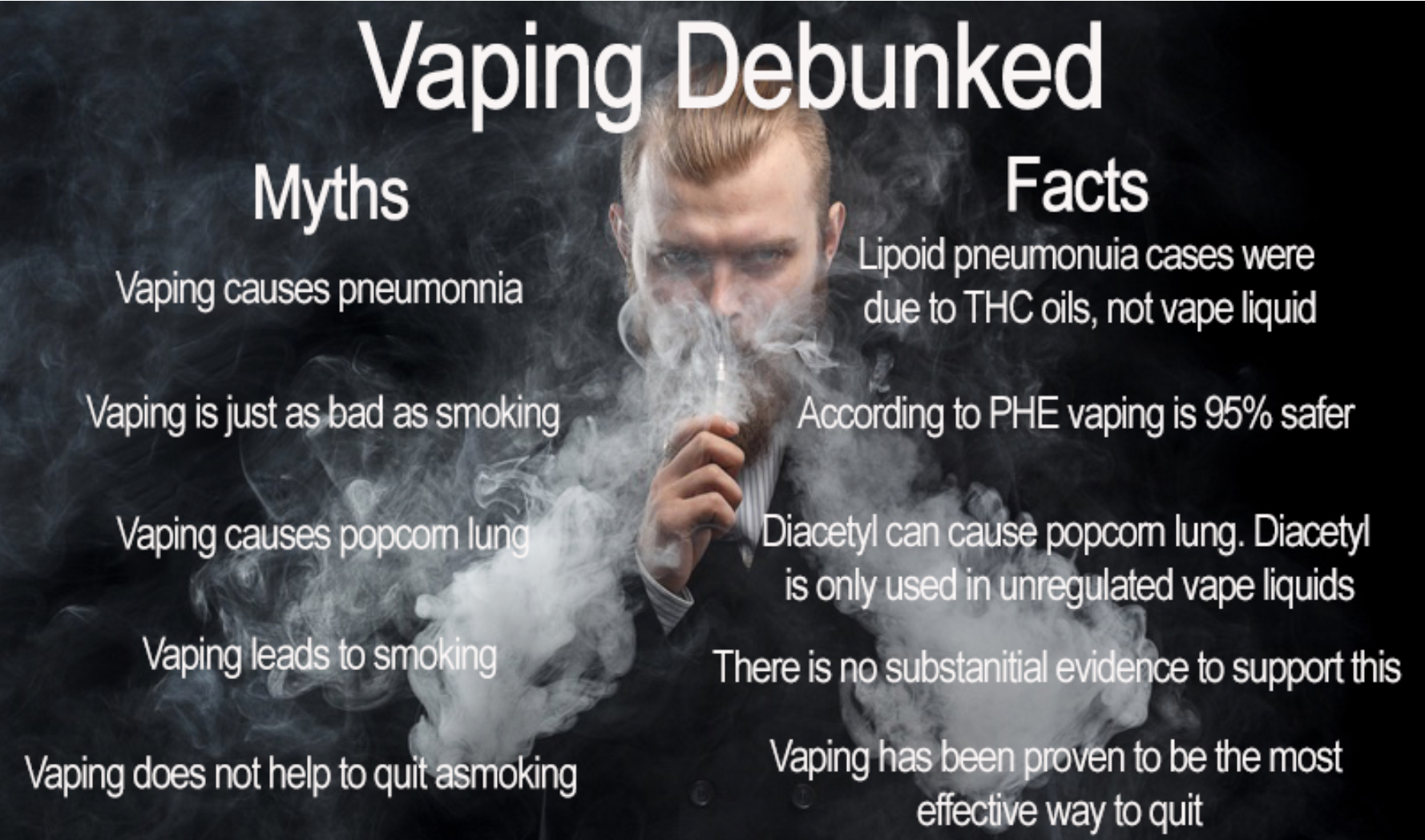 Debunking the Misconceptions of Vaping

Now that we understand that the word “vaping” is simply describing an action, it makes it easier to sift through and debunk common misconceptions. Vaping in the sense of a smoking cessation tool has been proven to be safer than smoking.

When used correctly with quality products and correct advice, vaping is known to be 95% safer than smoking. Vaping cannabis products however has been shown to be far riskier than vaping whole plant cannabis.

If someone asks if vaping is safe, ask them what exactly they’re vaping and the answer will be clear from there.